In January 2019, Yodel set out to revolutionise their hand-held devices, with a dedicated project team assembled from various departments across the business to create the Bring Your Own Device app, designed to enable colleagues to use their own device to process deliveries while out on the road and confirm proof of delivery in real time. 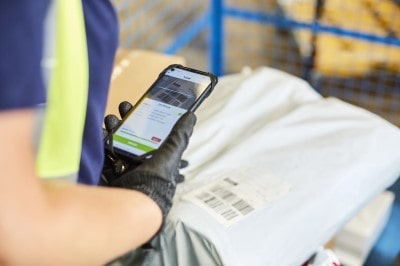 The first release of the app was October 2019, with the aim of supporting our operational and recruitment colleagues. with new Peak recruits able to use the app immediately. From the initial launch, the benefits became clear almost instantaneously, with couriers joining the business and being out on the road in record time. A further three releases in 2020 ensured that the functionality of the app surpassed the capabilities of existing HHTs.

During Peak 2020, the introduction of the app played a central role in the smooth onboarding of 2000 new Yodel couriers nationwide, with 50% of these roles being retained in the following months. More than 1000 new colleagues were able to train remotely and new recruits were able to hit the road straight away. The final release of the app in January 2021 saw the introduction of photography, with final mile drivers able to take photographs on their device that are stored on Yodel’s internal portal.

“Going forward, the team won’t be stopping at apps such as Bring Your Own Device, with an ‘Under The Roof’ app already in scope to provide our colleagues in Sort and Service Centres with a modern and easy-to-use application. The Driver and Courier app has been a transformational project and has changed the way Yodel not only delivers parcels but, has delivered fantastic results too”.